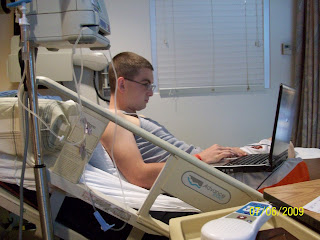 This picture was on the last day we were in the hospital. We were waiting to hear back from the neurologist, waiting to find out when we could get out of dodge, and waiting…well…you get the point.
We’re home now and trying to settle into our new “normal” (whatever that might be). The meds have made Nick very sleepy, but we are also pretty sure that he is just plain old worn out from everything he’s been through these last couple of days. (I know the rest of us are too)
We’re not completely sure what the future holds, but thankfully we know the One who does and in Him we are finding great peace right now. I mentioned the other day that there were so many “God moments” throughout this whole ordeal and so just to show you that God IS in the details I wanted to share a few of them with you.
1) It was a Sunday morning, and since hubby is a Pastor and I work in ministry too, that means we both should have been at church that morning. I had been sick the day before (4th of July) and still had slight fever, body aches, & sore throat, so I decided that I should stay home on Sunday so I didn’t infect the entire church with my cooties. God was in the details.
2) Nick was supposed to be working at the grocery store on Sunday from 10am – 6pm. He woke up at 7am not feeling well (we later figured out that he probably had a seizure around that time and we saw him “after” when he was kind of out of it). I told him he should stay home and get some rest too. God is in the details.
3) Nick went to his room to sleep, I went to my room to sleep, then at about 8:30am I asked him to come to my room so I could “keep an eye” on him while I rested too. He called into work and told them he was sick & wouldn’t make it that day. God is in the details.
4) At 11am my cell phone rang, it was my youngest son (Bailey) asking me about snacks for the kids ministry. I was completely worn out & took a minute to shake my head clear to talk to Bailey about his question when at that moment I felt a thump on my head. It was Nick in full blown grand mal seizures. While I was on the phone with Bailey I told him to run & get his dad out of church. God is in the details.
5) I called hubby’s phone, which was not turned on silent yet (that never happens) and was able to tell him to come home immediately. God is in the details.
6) One of the paramedics that came to the house is one of our neighbors. We’ve never met him, but he said that he sees the kids out playing and Nick out running. God is in the details.
7) I called my mom & dad to let them know what was going on (they attend our church) and they came straight over to the hospital. My mom is having her 7th out of 8 chemo treatments this Friday (she can’t afford to get sick), and while she was at the Peds ER there was not a single other person there. God is in the details. 8) When they decided to transport us to the children’s hospital to be admitted and do more tests one of the transport paramedics was Nick’s respiratory therapists from the time Nick was in the PICU for 51 days back in 2005. He remembered us and instantly clicked with Nick. God is in the details.
9) One of our old PICU nurses was in “Charge” when we were being brought over to the children’s hospital and made sure that we were set up in one of the BEST rooms they had (it was a mini suite) so we would be comfortable. God is in the details.
10) When you get admitted to the hospital they always ask your religious affiliation (not sure why, they just do). The nurse that was taking our information asked me that and I mentioned that we are Christians and that Nick’s dad is a Pastor and she said, “Well, Amen, we’ll just have to pray that boy healthy”. (She is a believer too) God is in the details.
11) There are more…but the BIGGEST sign for us that God IS in the details was this…we have not had health insurance for 8 long months. If you have kids then you know just how stressful that is, but when you have a kid that has a pre-existing condition (Nick has diabetes) then it is even more nerve wrecking. We JUST got our health insurance, effective July 1st, a mere 4 days before Nick would have a seizure.
That, my friends, is how I know, that God IS in the details. This is my life work: helping people understand and respond to this Message. It came as a sheer gift to me, a real surprise, God handling all the details. When it came to presenting the Message to people who had no background in God’s way, I was the least qualified of any of the available Christians. God saw to it that I was equipped, but you can be sure that it had nothing to do with my natural abilities. ~ Ephesians 3:7 TM
So here we are…taking it one day at a time.