Skip to content
It was six o’clock in the morning and we heard noises coming from our oldest son’s room. It wasn’t time for him to get up for school yet, so my husband went in to check on him. Within minutes he knew something wasn’t right and called me to come in there and help him.

(this is a picture of my husband following behind the ambulance)
My husband had a Men’s Bible Study that he was leading that morning and was going to run in and get things set up, then hand it off to one of the guys on the team, then we were going to take our son to the urgent care clinic to see what was going on.
While he was gone our son went from not good to progressively worse until he started having seizures for over forty-five minutes. Within seconds I was on the phone with 911 and my then nine year old son woke up and in the midst of the craziness called my parents to have them come over to our house. My husband, my parents, and the Emergency Response team were at the house within minutes and from that moment on, a journey began for our family that has forever changed our lives.

Our son was airlifted to the local children’s hospital where he spent the next fifty one days, most of which was in the Pediatric Intensive Care Unit (PICU). The first forty-eight hours were touch and go and life seemed to be swirling around us at a rapid pace…doctors, specialists, nurses, family, friends, people everywhere…to be quite honest I am pretty sure the first few days we were in shock. Up until this day our son never had anything wrong with him, no broken bones, nothing other than regular childhood colds and such.
Yet, here we were, standing in the midst of all the machines, all the strangers and the noises…wondering what was going on to our precious boy. There were a couple of times we almost lost him…but, oddly enough, we had a peace that can only come from Christ that brought us comfort through this horrific storm. Within a few days we were told that he would be in the hospital from six-to-eight weeks and that we would need to be prepared for an uphill battle because his organs had started to shut down.
The diagnosis was pancreatitis and they told us that he would be insulin dependent for the rest of his life.  It was absolutely one of the most traumatic and painful experiences of our life, but throughout our time in the hospital we clung to the truth that God was with us and that He had a purpose for all of this. One of the verses that brought me great peace was John 16:32, “Yet I am not alone, for my Father is with me.”
Now here we are…six years later, on our Nick-a-versary (that’s what we call this day, 8/17), celebrating God’s faithfulness for carrying us through that torrential storm. Our son, who was eleven at the time, is now seventeen years old and a Senior in high school. There were days that we weren’t 100% positive that this day would come, but we knew that no matter what happened that we weren’t alone, so much has changed in our lives, but that one constant never has. 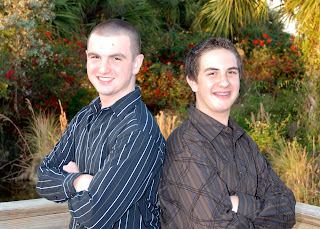 (our boys earlier this year)
We’re so thankful for this incredible journey that we’ve been on with God over the years. It has opened our eyes to so much…to change, to improve, and even to be thankful for. These storms have changed our lives and even though I would never willingly want to endure all of that again, I can see that He took every single thing we went through and used it for His glory, what more can I ask for than that?
So no matter what storms are in your life right now you too can rest in John 16:32, “Yet I am not alone for my Father is with me” and know that He has your back. Cling tight, hold on, keep your head up…when things start to fall apart He is right there with you.
Happy Nick-a-versary!